Heart of the Factory (movie)

Posted on April 29, 2014 by precarityandexclusion

Heart of the Factory, documentary by Ernesto Ardito i Virna Molina
Argentina, 2008, 58 minutes

The movie shows life of a group of workers in Patagonia.  The film centers on a popular uprising of workers at the privately owned Zanón ceramic tile factory who resisted eviction when the factory closed its doors in the midstof the economic crisis. The workers appropriated the factory, created a cooperative, and renamed the company Fábrica sin Patrones (Factory without Bosses—FASINPAT). The long opening sequence, which features a group of schoolchildren observing the process of production, serves as an allegory for the mixing of earth and labor to create goods for the community. It is a rousing sequence, full of hope for the workers’ aspirations of rebuilding the country’s neglected industrial infrastructure in the aftermath of the crisis. Corazón de fábrica stresses the important work these collectives have done to educate their communities about processes of production and the fundamental role workers must play in determining the conditions of their labor. Molina and Ardito are seasoned filmmakers, and it shows. The pair directed the award-winning feature Raymundo (2003), an inspiring homage to the influential documentary director Raymundo Gleyzer, who was disappeared by the last dictatorship on May 27, 1976. Several of the essays in this issue refer to Gleyzer’s groundbreaking documentary work and its influence on contemporary filmmakers. 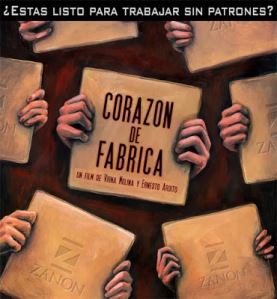 This entry was posted in film. Bookmark the permalink.